With the dovetails of the main carcass completed, I wanted to move to do the interior next.  When I had made my mid-sized Japanese carpenters tools, I saved the interior for last.  At times, I had found it hard to put in some of the nails.  I figured if I marked up some locations while the carcass was dry fitted, used my engineering square, and was careful, I could probably do the interior assembly next. 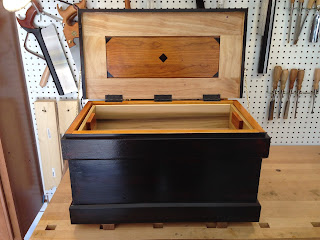 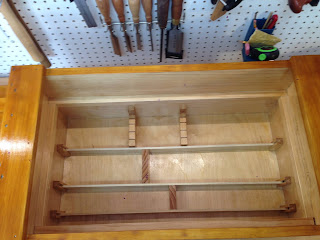 In terms of techniques and layout for the mini-ATC, it would be similar to the Japanese carpenter tool chest.  It would just have less tools.  Though I would cut space for three saws (future proofing), I planned to only put in two.  The tools would be held in place by nailing sawn down grooved wood in the sides made with the plough plane and then some 1/4" thick poplar so the tools didn't rattle into each other.

I did the layout carefully so that when things were assembled, things would line up.  If it didn't, I would just remove the bits that didn't a fix when everything is assembled.  I am a woodworker after all. 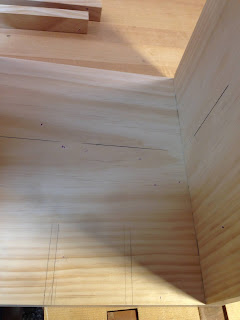 For the grooved saw pieces, rather than nail them into the sides, I glued in some thin stock to basically build out a housing dado on both the side wall as well as the 1/4" stock.  That way, all I had to do was slip in the saw pieces into place during final assembly.  My tool chest isn't a roller coaster so I figured a friction fit would be good enough (and it has been so far).  After that, I nailed in the small 1 or 2" grooved pieces onto the sides that would eventually hold the 1/4" thick poplar that keeps the tools from banging around.  Sadly, I didn't take any in process pics of that. 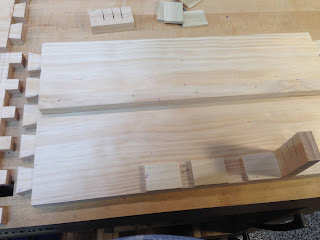 From there, I nailed in some scrap 3/4" wood that will hold the top tray.  It's fairly straightforward.  Only think I needed to check was what would be the tallest tool in the bottom level so that the bottom of the tray doesn't hit it.  I can't recall which it was but it was likely either a hand plane or the saw handle.  I put these 3/4" scraps on all 4 sides to better support the tray that will sit on top.  I suppose you could do just two.  I also like to put little chamfers on these pieces.  I do it because it makes me feel happy that I paid attention to some little details.  No one else will really notice and that is fine by me. 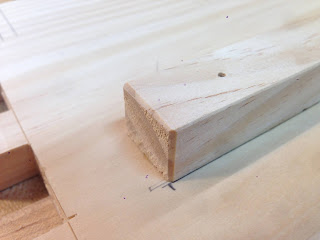 With all of this done, I wanted to finish the interior as it's a bit easier to do so before assembly.  Also, I've never done it this way so it was an opportunity to try something different in a low pressure situation.  My go to finish is garnet shellac.  I but the flakes and dissolve it up to about 1-1/2 to 2 pound cut.  My possible, I prefer to use drinkable 190 proof alcohol.  Mostly that way, the only chemical fumes I'm breathing in is ethanol.  I've used denatured alcohol to dissolve but I don't think breathing in methanol is a good idea.  Being a chemist, I tend to worry about what I breath in probably more than most given the nasty chemicals I've used over the years.  Of course, I forgot to take any images of this.  The only thing I did was use blue tape to cover the areas that I wanted to glue up.
With that all done glue up went well (sorry for some reason I didn't take these photos either).  Below shows what the finished bottom looks like.  The tools shown in the bottom aren't the final ones that will be kept there.  They are placeholders as I purchase the final tools.  I have some and that will be a future post.  The next post will be attaching the bottom (and maybe the skirting). 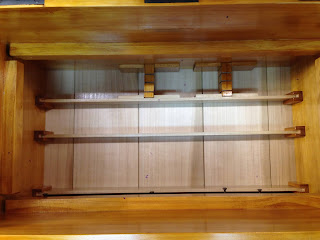 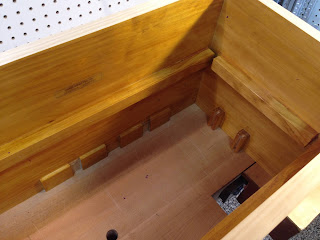 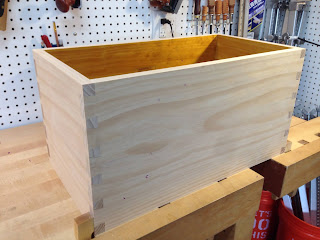 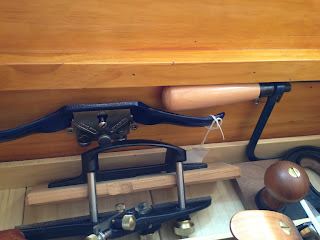 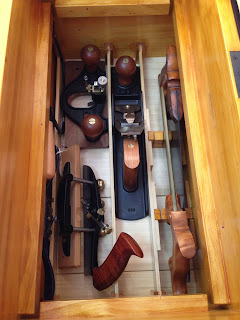 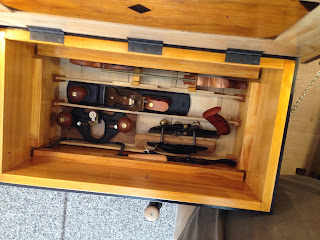 Posted by HoningTheEdge at 7:00 AM