In 2018, we surprised our daughter one day after school and drove down to Disneyland for a long weekend.  She is at an age where it is a delight for her to be there.  It is a delight for my wife and I to relive the experience through her.  Normally, I don't buy anything for myself.  One day, we were near the main entrance and there was a high end store full of items such as artwork.  While wandering about, we came across a resin cast version  of Geppetto's workbench.  It is a small box (about 6" long) that opens up.  The person I talked to knew the artist who carved it.  Was a friend of her mom's.  I was very excited to find this. If you every happen to have a reason to be at the happiest place on earth, keep an eye out for it. 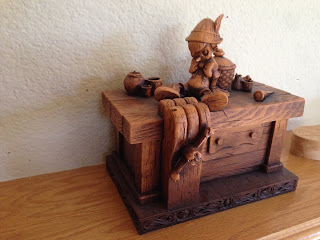 Posted by HoningTheEdge at 7:00 AM No comments:

Or so the phrase goes for a cooking competition show goes that wife likes to watch.  In Fine Woodworking, Ben Strano did a video earlier this year on a container organization system he uses for small parts.

My nails and screws were getting out of hand in little boxes or bags.  As such, I ordered some.  I really like them.  I had used a bunch of small nails not that long ago and was getting a bit low.  As such, I went and bought a bunch more to top off what I have.  The individual boxes of nails don't cost much.  It's mostly the hassle of going to a store to get them.  As such, when I got to buy some, I tend to stock up on other sizes.  I also have a collection of cut nails.  They come handy from time to time.  I try to keep some general woodworking/around the home supplies in the house so I don't need to rush out to the store for something.  When I order hinges from Horton, I typically order a few more to slowly build up some internal home inventory.  Having extras around for some reason give me great peace of mind. 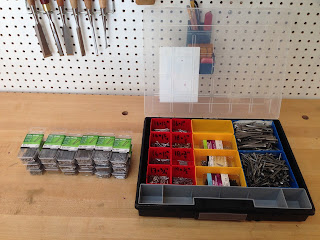 Posted by HoningTheEdge at 7:00 AM No comments:

In Jan 2020, my wife and I were sitting at our church's hall having a pancake breakfast.  2019 had been a good year.  We were reminiscing about Christmases past.  We both really enjoyed as kids the simple advent calendar's of the 1970s.  Each day you would peel open a door, see something nice or get a small treat.  It also allowed us as kids to countdown the days till Christmas.  My wife mentioned that she would really like one for our daughter.  On the back of a church bulletin I sketched out something (Figure 1).  The two design elements I wanted to capture were the secular and non-secular aspects of the holiday.  The choice of maple and cherry door fronts allowed for a cross to be seen.  The vertical approach of the 25 days/boxes allowed for the image of a tree.  It's my first design.

When I say my design, I mean that I didn't find any direct inspiration for it.  It is such an obvious and simple design for an advent calendar that I am sure somewhere someone has done something very similar to this.  If you happen to know of one, please comment below as I'd love to see it. 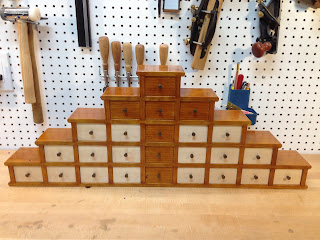 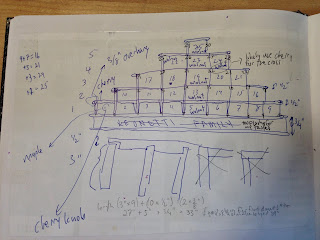 Figure 1 - The sketch during that initial breakfast conversation.

After the initial sketch, I did a more detailed sketch with dimensions, etc.  The second sketch was bit more refined but essentially the same thing.  I thought half inch thick stock would work well.  For the back I decided to use quarter inch thick cherry that would reside in clever rebates (more on this later).

I work with hand tools.  I don't enjoy dimensioning wood by hand (especially thickness).  I have a local place that will provide S4S to my specifications.  I broke down the stock using my favorite holdfast and gave the wood a quick hand plane finish to remove any marks left by machines. 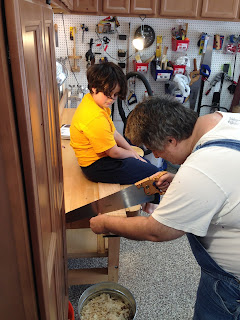 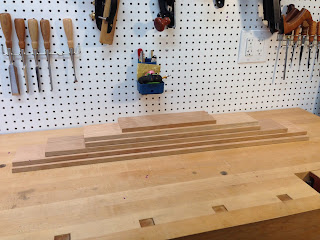 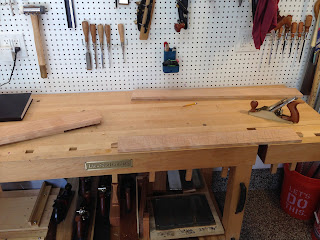 A total of 60 housing dados (they go by various names) would be needed.  Critical to this project would be alignment of the vertical pieces.  I used a pair of dividers to mark them off with the wood ganged up. and transferred knife lines on each piece while still together.  I also took the time to mark x's on where the dado would go so that I didn't cut a dado on the wrong side.  Even so, I came close a few times.  If you open two of the drawers there is a knife line on the wrong side of where the dado needed to go.  Such is life.

I enjoy using a router plane which is good because I had a lot of them to do.  I either sawed or chiseled down the sides then used a chisel to remove the bulk of the waste and then used my router plane. I developed a rhythm and flow for this which was very nice.  It became very peaceful work.  In order to ensure a snug fit, all of the vertical pieces were numbered and custom fit to a specific dado.

You will notice in the third photo below that the horizontal sizes are longer at the extreme ends of each level than all of the others.  That way, without much effort, I effectively have a housing dado in the back of the piece without having to carve out groves.  Technically, the top and bottom of each is only flush but that is ok. 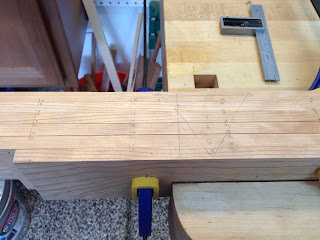 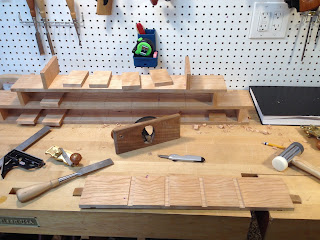 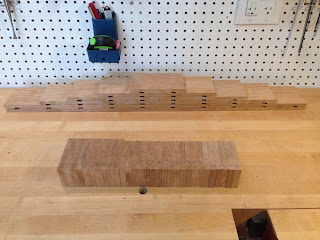 Now with the housing dados done, I needed to round over the ends on the sides.  I practiced on some scraps to get the number of plane swipes sorted out for the round over I wanted.  After doing that, I then used a bit of sandpaper to make the round over smooth.  It was reasonably quick and easy to do this.
I decided to not have drawer for each compartment.  That would have been a lot of work and not really added any value to the functionality of this piece.  I just needed to create a door.  I decided to recess the door in by about an 1/8".  By avoiding it being flush to the front, I avoided having to fix any that weren't perfectly flush.  To provide a positive stop for the door, I glued  some 1/8" thick cherry to the vertical dividers.  It was simple but took a while to come up with it. 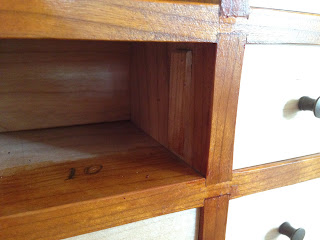 Figure 4 Side spacers to register door depth.
For the doors I was going to create, I didn't want to rely just upon friction for them to stay in place.  After much though, I did a mockup in which I drilled a hole in the underside of the horizonal piece, affixed a rare earth magnet, and then used a screw in the top of the door.  It was strong enough to hold the door in place.  Then, it was just a matter of marking out and drilling holes and adding magnets.  I worried about drilling through but I was careful and that didn't happen. 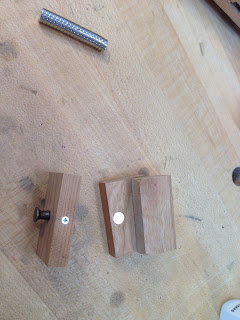 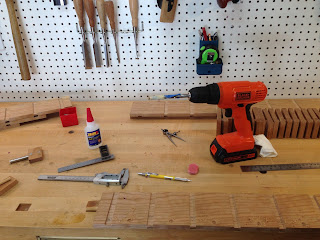 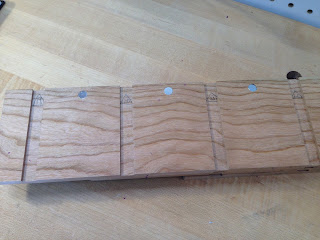 Figure 4 Mock up and Magnets so doors stay in place beyond just friction
Glue up with fun to say the least.  I decided to do one row at a time, let it dry overnight, then glue up the next row.  That worked reasonable well.  I used TiteBond 3 as it's my go to glue.  I use it because when it dries, the color is closer to cherry than other glues.  If I had to glue it over again, I probably would go with a liquid hide glue for longer open times.  This is the first time in my life where I used all of my clamps.  In fact, for the last row, I had to go out and purchase two more clamps.  I hate the quote "you can never have too many clamps."  In this project, I needed more; sigh. 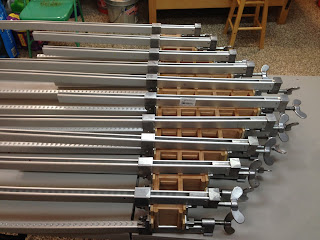 As for the doors themselves, I used long pieces of maple and cherry and carefully numbered them so there is continuous grain across.  Most won't notice this but it makes me happy. The final width and length sizing of the doors was done by using a shooting board.  I didn't want to make it so snug that it would be difficult to open. Since I was working when it was near our most humid max, I didn't need to account for expansion.  The kiln dried wood had also sat in my shop for 6 months so I know it was acclimatized. 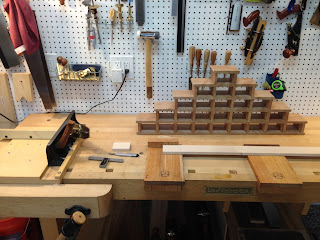 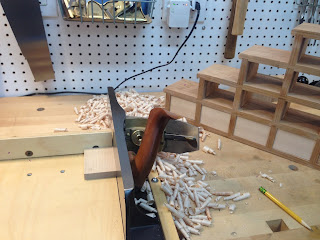 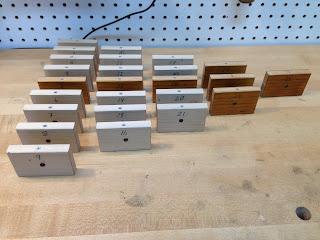 Figure 5 Sizing the doors.
The last remaining woodworking involved ripping 1/4" cherry to width and length for and then screwing it in place (Figure 6).  After that it was a matter of finishing the project.  I went to my default favorite, garnet shellac for the cherry and blond shellac for the maple.  This was then followed by paste wax. 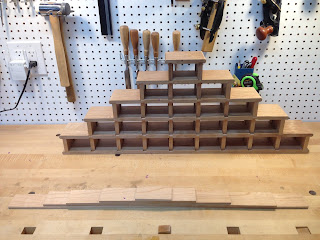 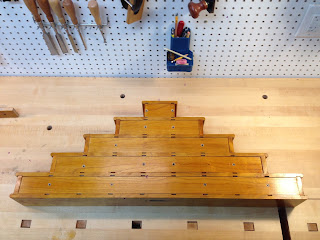 Figure 6  Attaching the back with screws.
All in all it took a bit more than 100 hours to make.  No doubt it will get a lot of use in my family by us and then hopefully by my daughter when she is grown.  My wife is very happy and proudly displays it on the fireplace mantle. 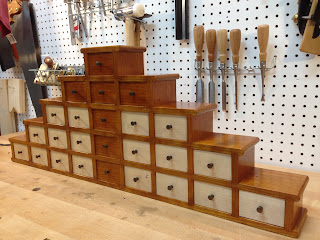 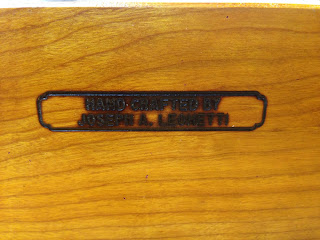 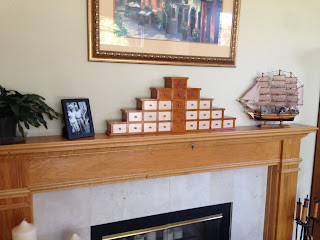 Figure 7  Finished product.  My wife is happy (and so am I).
Posted by HoningTheEdge at 7:00 AM 2 comments:

My Strop Saves the Day

I've been working on making a mini-anarchist tool chest.  I finished the lower skirting and was working on the upper skirting dovetails.  I noticed my chisel wasn't pairing endgrain very well.  I needed to get inside the house and prepare dinner (actually was a bit late for this).  Yet, I wanted to finish pairing the endgrain on the dovetails.  I took out the strop, gave the chisel 30 passes then used it.  The chisel behave completely differently.  Before it didn't want to cut the endgrain unless I used excessive force.  Now, it paired the endgrain like it should.  As I finished working for the evening I was proud of myself for 1. realizing the tool wasn't working like it should (i.e. sensitivity in my work) and 2. stropping can reestablish and edge.  It was a nice way to cap off the evening. 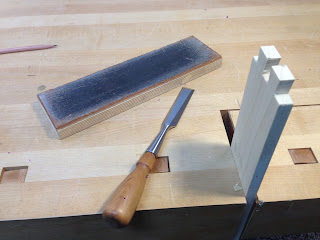 Posted by HoningTheEdge at 7:00 AM 2 comments: